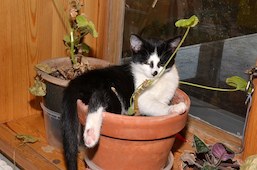 Having two cats, and a bunch of plants in my apartment, has taught me a  few tricks on how to  keep the cats away from the plants. I have learned at this point its not the cats fault for being curious. I know what they are going to do, and if I fail to put the plants away from their usual curiosities, either something will get broken, the plant will get hurt, the cat will get hurt, or at the very least, there will be a bunch of soil everywhere.

So here are a few tips to deter cats from house plants:

Good advices! I'd love to read a list of plants that are toxic to cats to aviod them. And also if there are any plants that are better (less risk of being eating by cats haha) to have.

I can do that! Thanks Vendelay 😄

Start your own community!

Get started in minutes. For free of course!

Thanks for the tips! I have two cats and they like some of my plants a little too much

#3 Ylvala: Yeah, its been a big problem, so many pots have broken due to my cats curiosity. At least the cats haven't been hurt though!

#4 Same here. But my cats doesnt eat the plants, they play with them, hahaha….